Hashing Concept :- There are many possibilities for representing the dictionary and one of the best methods for representing is hashing. Hashing is a type of a solution which can be used in almost all situations. Hashing is a technique which uses less key comparisons and searches the element in O(n) time in the worst case and in an average case it will be done in O(1) time. This method generally used the hash functions to map the keys into a table, which is called a hash table.

Hash table is a type of data structure which is used for storing and accessing data very quickly. Insertion of data in a table is based on a key value. Hence every entry in the hash table is defined with some key. By using this key data can be searched in the hash table by few key comparisons and then searching time is dependent upon the size of the hash table.

There are various types of hash function which are used to place the data in a hash table,

In this the hash function is dependent upon the remainder of a division. For example:-if the record 52,68,99,84 is to be placed in a hash table and let us take the table size is 10. 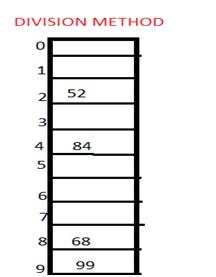 In this method the key is divided into separate parts and by using some simple operations these parts are combined to produce a hash key. For example: consider a record of 12465512 then it will be divided into parts i.e. 124, 655, 12. After dividing the parts combine these parts by adding it.

It is a situation in which the hash function returns the same hash key for more than one record, it is called as collision. Sometimes when we are going to resolve the collision it may lead to a overflow condition and this overflow and collision condition makes the poor hash function.

If there is a problem of collision occurs then it can be handled by apply some technique. These techniques are called as collision resolution techniques. There are generally four techniques which are described below.

It is a method in which additional field with data i.e. chain is introduced. A chain is maintained at the home bucket. In this when a collision occurs then a linked list is maintained for colliding data. 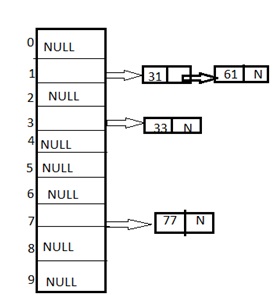 Example: Let us consider a hash table of size 10 and we apply a hash function of H(key)=key % size of table. Let us take the keys to be inserted are 31,33,77,61. In the above diagram we can see at same bucket 1 there are two records which are maintained by linked list or we can say by chaining method.

It is very easy and simple method to resolve or to handle the collision. In this collision can be solved by placing the second record linearly down, whenever the empty place is found. In this method there is a problem of clustering which means at some place block of a data is formed in a hash table.

Example: Let us consider a hash table of size 10 and hash function is defined as H(key)=key % table size. Consider that following keys are to be inserted that are 56,64,36,71.

In this diagram we can see that 56 and 36 need to be placed at same bucket but by linear probing technique the records linearly placed downward if place is empty i.e. it can be seen 36 is placed at index 7.

This is a method in which solving of clustering problem is done. In this method the hash function is defined by the H(key)=(H(key)+x*x)%table size. Let us consider we have to insert following elements that are:-67, 90,55,17,49.

It is a technique in which two hash function are used when there is an occurrence of collision. In this method 1 hash function is simple as same as division method. But for the second hash function there are two important rules which are

The hash functions for this technique are:

Where, p is a prime number which should be taken smaller than the size of a hash table.

In this we can see 67, 90 and 55 can be inserted in a hash table by using first hash function but in case of 17 again the bucket is full and in this case we have to use the second hash function which is H2(key)=P-(key mode P) here p is a prime number which should be taken smaller than the hash table so value of p will be the 7.

We Wish You Would be gotten the Hashing Concept

To Understand the Hashing Concept